No home is complete without the pitter patter of kitty feet

The name 'Maine' comes from the North Eastern American State where the breed is thought to have originated. The 'Coon' bit is a little more difficult. The original cats tended to be brown tabbies, with very dark back and a long flowing tail, rather like a raccoon, and long ago, people thought that they must have evolved from mating’s between domestic cats and raccoons. Of course we now know that this is genetically impossible, but this may have been where the name came from.

In fact there are lots of legends surrounding the Maine Coon's origins, including one that they originally came from Marie-Antoinette, and were transported to America from France for safety when things started heating up at the time of the French revolution. However, it is far more likely that the Maine Coon actually evolved from mating’s between domestic shorthairs introduced by early settlers and angora types later taken across the Atlantic by seafarers. This is where Darwin's theory of survival of the fittest comes into play and only the best of the breed survived, mating to produce a hardy animal, capable of living in a cold harsh climate. I am pleased to say that man's heavy hand has not altered the breed and the cat's appearance has remained virtually unchanged since its beginning.

The Maine Coon was originally the American wild cat, living mainly on farms where it was held in high esteem by farmers for its ability to catch vermin. The cat has all the points of a typical hunter. It has large eyes and ears, essential for detecting prey, and a big, muscular body for catching them. Being a cold climate animal, it has a long silky shaggy coat, short over the head, becoming longer own the back, stomach, legs and ruff. This is not for beauty, but for sheer survival. There is a soft undercoat, covered by a harsher weatherproof topcoat to keep the animal dry. This must not be fluffy, like a Persian type, otherwise he may become entangled in hedges whilst out hunting. The shagginess acts rather like layers of newspaper to wrap up fish and chips, it traps air which helps to keep the animal warm.

The legs must be long, thick and powerful, the feet should be large and round, tufted underneath going backwards to form a 'snowshoe' effect, again for coping with the harsh winters. He must also have large feathered ears, preferably tufted at the tips - unlike the Persian - and feathering should extend beyond the outer edges of the ear. The frontal ruff should start at the base of the ears, and is normally heavier in males than females. All this is to prevent heat loss. The Maine Coon's coat is very seasonal, and much can be lost in the summer months, particularly with un-neutered animals.

The Maine Coon's pride and joy is his tail. In fact he is often referred to as 'the tail with the cat on the end'. The tail must be at least as long as the body and is especially long so that the cat can wrap it around its body rather like a blanket for extra insulation.

So, this is why the Maine Coon looks this way. Because it has evolved naturally, that is why many mistake it for a moggie, after all they have evolved in the same way. But, believe me, once you've seen a few, you begin to recognise the differences.

The Maine Coon takes 3-4 years to finish growing, and people expect to see a giant cat sitting in a pen, when at fifteen months he's still only a baby. Fully grown females average 7-12lbs and males 10-18lbs. Granted, a few do reach the 20's but imagine stewarding at a show and having to cope with a two stone monster who barely fits in the pen and certainly doesn't fancy going back in once you've given him a taste of freedom! I for one wouldn't fancy too many of those to handle in a day.

People seem to have the impression that any possible

First and foremost,chocolate, lilac or Siamese Points are

This is because they are not natural colours to the area where the Maine Coon originated from. Most other

colour combinations are accepted, but cats with white (known as bi-colours) aiming for the show bench must adhere to certain colour distributions. (See the GCCF Standard of Points for more details).  Blue or odd eyes

are only permissible in white cats.

In actual fact there are 64 colour combinations on the

Maine Coon G.C.C.F. Standard of Points. These include solids. tortoiseshells, tabbies (both Classic and Mackerel),

tortie-tabbies, smokes and shaded, all with or without white. Since the colour can take several months to fully develop, this can lead to headaches when registering kittens, as the colour you see at eight weeks may be completely different three months later as it develops.

Coat colour and pattern are of less importance

than coat type and texture.

If you have any queries or wish to make an appointment, please contact me: 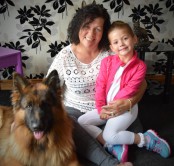 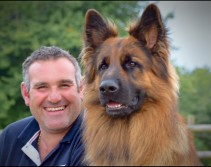 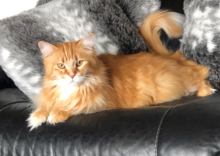 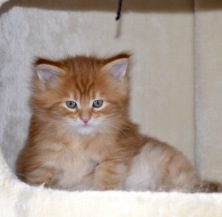 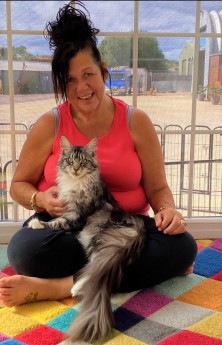 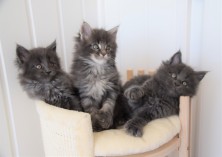 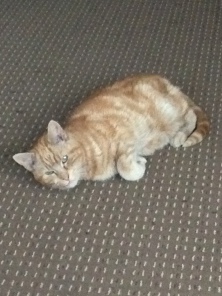 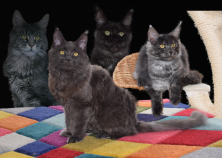